Introduction
The Demoman is a scrumpy-swilling demolitions expert from the Scottish town of Ullapool, and is one of the most versatile members of the team. Armed with his Grenade Launcher and Stickybomb Launcher, the Demoman uses his one good eye and the knowledge of his surrounding environment for well-timed sticky bomb detonations that send enemies to the Moon, often in many pieces. 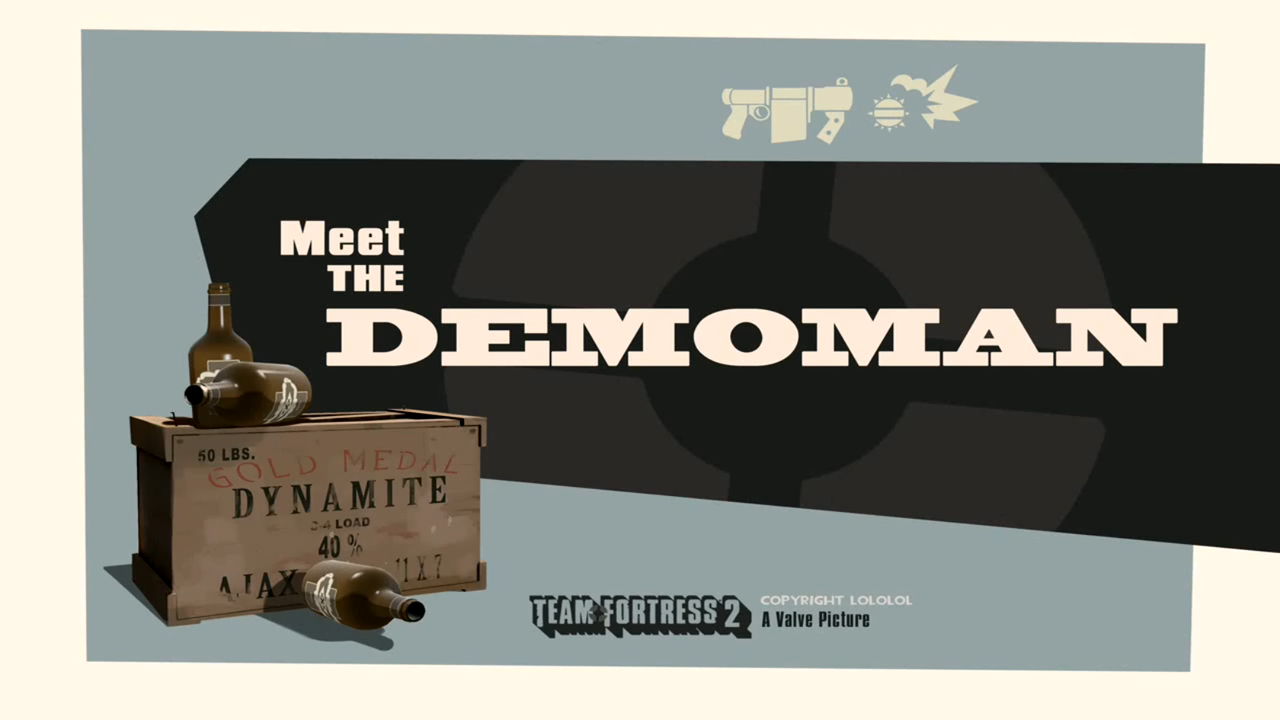 Basic Info
Demoman is extremly deadly with his explosives. But vanilla Demoman shows his weaknesses mostly at close range. Demoman is also considered as the very generally class and probably the best Sentry gun counter. Even the Demo is vulnerable against close range fights, there’s a very specific subclass called Demoknight.

Let’s get quickly over the Demo’s stats:

Most common primary which can wreak all kinds of havoc on enemy players, especially with good aim. It’s ability to punish enemies without ever exposing oneself, can make you a highly dangerous opponent. Unlike a lot of Team Fortress 2 weapons, Demoman weapons like this launcher do not have damage falloff, so grenades do the same damage no matter where you are.
It’s grenades explodes on direct hit or they bounce off walls. Try to use your primary first and then switch to your Stickybomb Launcher.

Unlike stock Grenade Launcher, the Iron Bomber has diffrent pipes which doesn’t bounce off. This can be used to "grenade jumping". It’s less practical than the sticky jumping but it can help.
The weapon allows you to more accurately place your pipes where you want. See an area you certainly want your pipes to stick to? Pull this weapon out. It isn’t too much different from the stock Grenade Launcher aside from this.

The fact that this launcher has bombs that don’t stick around to detonate, exposes you to direct combat. The faster grenades make it easier to aim though. The increased damage against buidings allows you to destry level 3 Sentry with only 2 pipes. I’ve never seen anyone said: "Dammit there’s a Sentry nest, better use Loch-n-Load."
You will usually use your Stickies to destroy a nest instead of this weapon.

Very fun weapon to play with. Your Grenade Launcher has been replaced with a small cannon which fires deadly cannonballs. If a cannonball deals both impact and explosive damage to an enemy within half a second, explosive damage will be a mini-crit. This feature is knows as a Double-Donk.
You can also control, when your cannonballs will explode by holding right-click.

These fabulous shoes are not all helpful in most situations. They give 25 more health and allow turning to be easier during shield charges. I would say go pick up your primary launchers. The shoes can be a lot of fun though, especially when playing pure Demoknight.
B.A.S.E Jumper on the other hand, isn’t very effective, maybe if you want to jump with Ullapool Caber or spam areas with stickies from above.

Stickybomb Launcher can hold 8 sticky bombs in a clip. Each sticky can be detonated after firing with alt-fire button. You can also hold the left mouse to charge the sticky bomb and launch it farther. What is so special about this weapon is that you can set traps, help yourself in a picky situation or tear your enemies apart. You can have up to 8 stickies on a battlefield and you can detonate them all at once. Make sure you have always loaded beacuse if you happen to run out of ammo in your primary, you will rely on the Stickybomb Launcher which – with no stickies left in a clip – would make you vulnerable.

Definetly a good option when defending multiple choke points, objectives or multiple gateways. The longer priming time makes the stickies less spamable. Scottish Resistance’s ability to destroy enemy stickies can be an advantage when fighting other Demoman. You can detonate few stickies without detonating all of them at once!

Unlike the Rocket Jumper, the Stickybomb Jumper can be a very powerful combination with Grenade Launcher or even the Loose Cannon. Something that’s called "Hybrid Demoman". More often than not, you’ll use 1 sticky to jump, learning how to "pogo" is good to mention for certain rollouts etc. For beginning, I’ll recomend using the Stickybomb Jumper as a mobile escaping tool.

Shields will be covered in a certain chapter.
Melee Weapons
Bottle

Well balanced weapons; they have a decent critical hit chance, and they don’t leave you more vulnerable at the start of your life like the head collecting melee weapon variants. This is a safe, and dependable melee weapon to have.

Common sword among Demoknights or hybrids. This cursed blade grants additional maximum health and movement speed for 1 head cutted (stacked up to 4 heads). Good to know that the Eyelander (and a few other melees) has longer range than the stock Bottle. Be careful using this with hybrid Demoman as you’re starting only with 150 health.

This weapon is a very dangerous melee weapon aside from the slower move speed. It has very powerful critical hits, and it can randomly crit. If you pair it with one of the shields, it can be great for killing people. I would recommend it mostly for ambush tactics. Otherwise, you are unlikely to catch a target.

From the stats, you can tell that this blade is meant to be used with shileds. There’s no point using Claidheamh Mòr without them. The damage vulnerability however makes this weapon pretty weak compared to other swords.

This weapon is all about good timing, only take it out when you are going to kill someone or you have to sacrifice 50 HP in order to switch back. However, the Half Zatoichi shines with a boots and shields which eliminates it’s biggest downside.
Keep an eye on the enemy wielding the same melee as he can kill you with a single blow. Same goes for you.

At this point, you have probably understood that the most of the swords is meant to be used with shields. Same goes for Persian Persuader. A fun weapon and one of my favorites. It can be used to make charge availability return more quickly with any ammo.

No. I really want to write any positive outcome for this weapon but it’s just horrificly bad. TF developers nerfed the Ulapool Caber to the ground with no good reason. It hurts to say but use something else than this.

This weapon has a double capture rate, which can be great for ninja capturing far points or just helping push through control points and payload carts. I wouldn’t recommend it unless the situation calls for it. It is equal to all default melee weapons except for the bullet vulnerability increase.

We’ll start with the well known subclass which trades a splash burst Demoman for a quickly flanking Demoknight. With boots and shield equipped, he can charge on enemies with his heavy sword.

There’s 3 types of Demoknight based on his melee choice:

Basic
Flanking playstyle. Doesn’t have that much downsides to begin with.

Collector
Starts weaker but after collecting heads, he gets powerful. Stacked up to 4 heads.

Restore
Relies on his charge. After kill, he regenerates health or charge meter to get away.

Charging shields are good for Demoknight. Let’s take a look at each shield:

From all three shields, this will grant you the most resistances. Use this when you’re using weapons which has vulnerability downsides

Splendid Screen allows you to charge more often and, with melee, dealing more damage. Use this with high damage weapons.

Little bit less of resistances but it gives you full turning control with charging. And if you get a melee kill, it refills your charge meter with 75%.

The Hybrid Demoman is something between a Demoknight and vanilla Demoman. The main loadout is basically any primary except Boots, any shield and a sword (usually eyelander)

With the Hybrid you want to use your Grenade Launcher or even the Loose Cannon (which I prefer) to a grouped enemies and the sword with a shield to attacking the loners. Eyelander is acutally great at this, although you have only 150 HP, attacking the loners you can get stronger and then switch to the primary and bomb everything.

Or often called pipe-only Demoman. Jumper always counts on his pipes or melee, with Stickybomb Jumper equipped, he can fly around the map and hitting directs without getting in a danger. Don’t forget that you can again use the Loose Cannon or even Loch-n-Load if you want for whatever reason…

Do you like discussing TF2 related things and playing with good people? Join our communities: