Team Fortress 2 HOW TO TELL IF A HAT IS DUPED

Step 0: THE MOST IMPORTANT PART OF THIS GUIDE 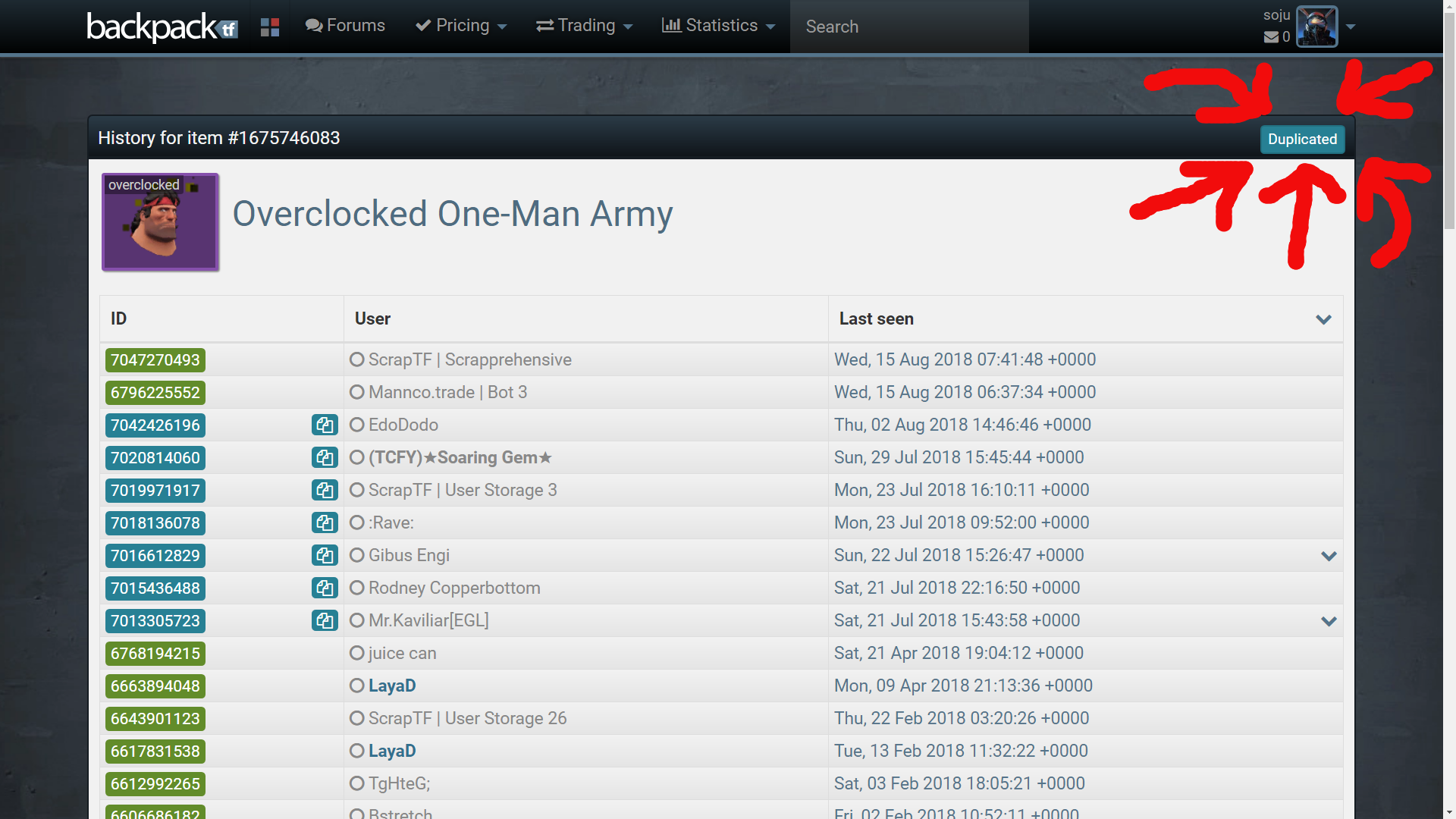 ***READ THE FOLLOWING OR RISK LOSING ALL YOUR ITEMS***

IF SOME IDIOT TRIES TO SAY YOUR HAT MIGHT BE DUPED AND THAT THEY NEED TO "VERIFY" IT BY HAVING YOU GIVE IT TO THEM, A "STEAMREP ADMIN" OR A "TRUSTED FRIEND" FOR FREE THEN JUST BLOCK THEM. THEY ARE TRYING TO SCAM YOU. SAME GOES FOR ANY "YOUTUBER" WHO WANTS TO GET YOUR UNUSUAL TO "USE IN A VIDEO".

BE SMART. NEVER GIVE YOUR ITEMS TO ANYONE IF YOUR NOT RECEIVING SOMETHING BACK IN THE TRADE WINDOW.

ALSO DON’T CLICK ON LINKS PEOPLE MESSAGE YOU, NO MATTER HOW LEGIT THE SITES LOOK. IT’S A PHISHING SCAM!!

PHISHING SCAMS ARE NOW MORE COMMON THEN EVER BEFORE, ALWAYS DOUBLE AND TRIPLE CHECK THE STUFF YOUR TRADING IS GOING TO THE INTENDED RECIPIENT.

If your account is hijacked, change your password and log out of steam on all devices. If you send your items to another account make EXTRA sure it’s not a scammer impersonating someone, check hours, inventory, name history, account age, all that.

Sidenote: Backpack.tf and TF2 Outpost have updated the look of their respective websites since this guides creation. THIS is what a duped hat’s history looks like now. Don’t worry, the process of determining whether or not a hat is duped remains the same, you’ll just be looking at screenshots of what the old bp.tf and TF2OP used to look like

Step 1: Find a hat to check 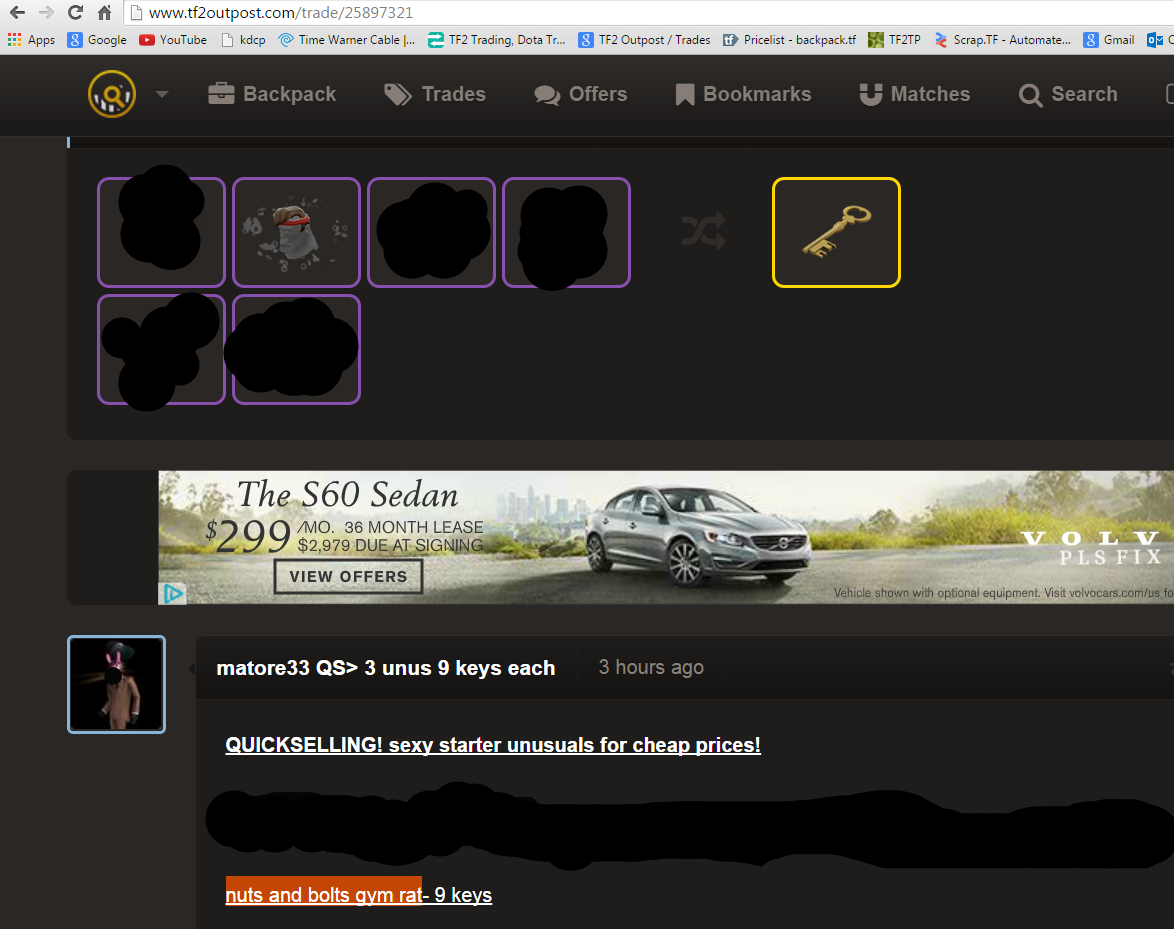 First, find the unusual you would like to check. Let’s assume you’re using the most popular trading site, TF2 Outpost[www.tf2outpost.com], to buy unusuals and would like to buy one from this guy. Lets check to see if his Nuts n’ Bolts Gym Rat is duplicated. If you’re not using Outpost just continue on to step 2 anyway.
Step 2: Using 1337 hax to get his Steam ID

and by 1337 hax, I mean the ability to copy paste. Go to the hat owners Steam profile through your web browser, then highlight and Ctrl + C his unique url. (Pressing Ctrl + C then pressing Ctrl + V is just another way of copying and pasting. The more you know!)

Update: Sometimes this doesn’t work if bp.tf is having issues or the user has a customized steam URL. These days I would recommend using http://rep.tf. This site will not only give a link to a users inventory on bp.tf, it also allows you to view many player reputation databases on one sleek webpage.

Step 3: Viewing his backpack through bp.tf

Go to https://backpack.tf/ and Ctrl + V his profile URL into the top right search box, his name and profile pic should appear.

If a profile doesn’t appear when you copy paste the profile link, you can go to his/her SteamRep and click directly on the backpack.tf link in the SteamRep profile.

Step 4 : Getting to the History 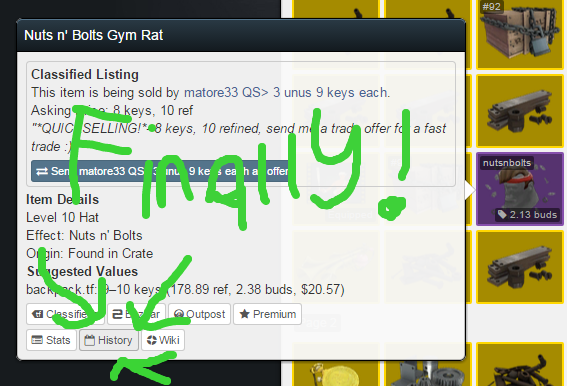 Look through the guys backpack to find the hat you wanna check (I recommend using the search function) and then hover over it. a biq square should appear with lots of stuff inside of it, click on the rectangle at the bottom of the square with a cute little calendar inside of it labelled "History".
Step 5: Checking to see if the hat is duplicated 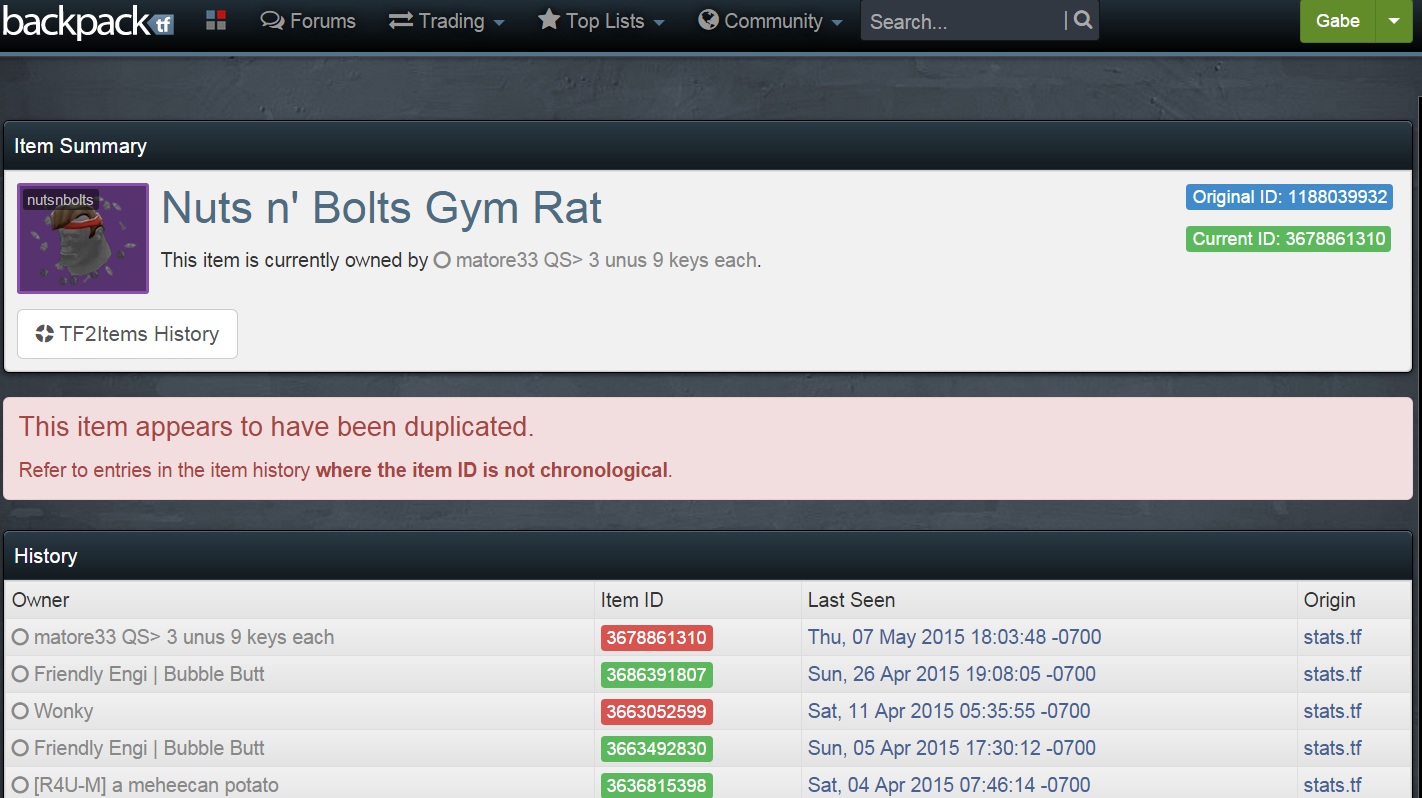 Strangely enough, this is the easiest part. If the hat is duped, there will be a clearly visible red rectangle stating so. (No system is perfect, bp.tf doesn’t ALWAYS tell you if it’s duped, but the chances of error are unlikely enough to not worry about.) If you wanna be super ultra sure it’s not duped, refer to entries in the item history where the item ID is not chronological. That’s it. Your done.
Bonus: Example of a Non-Duplicated (aka Clean) Hat + FAQs 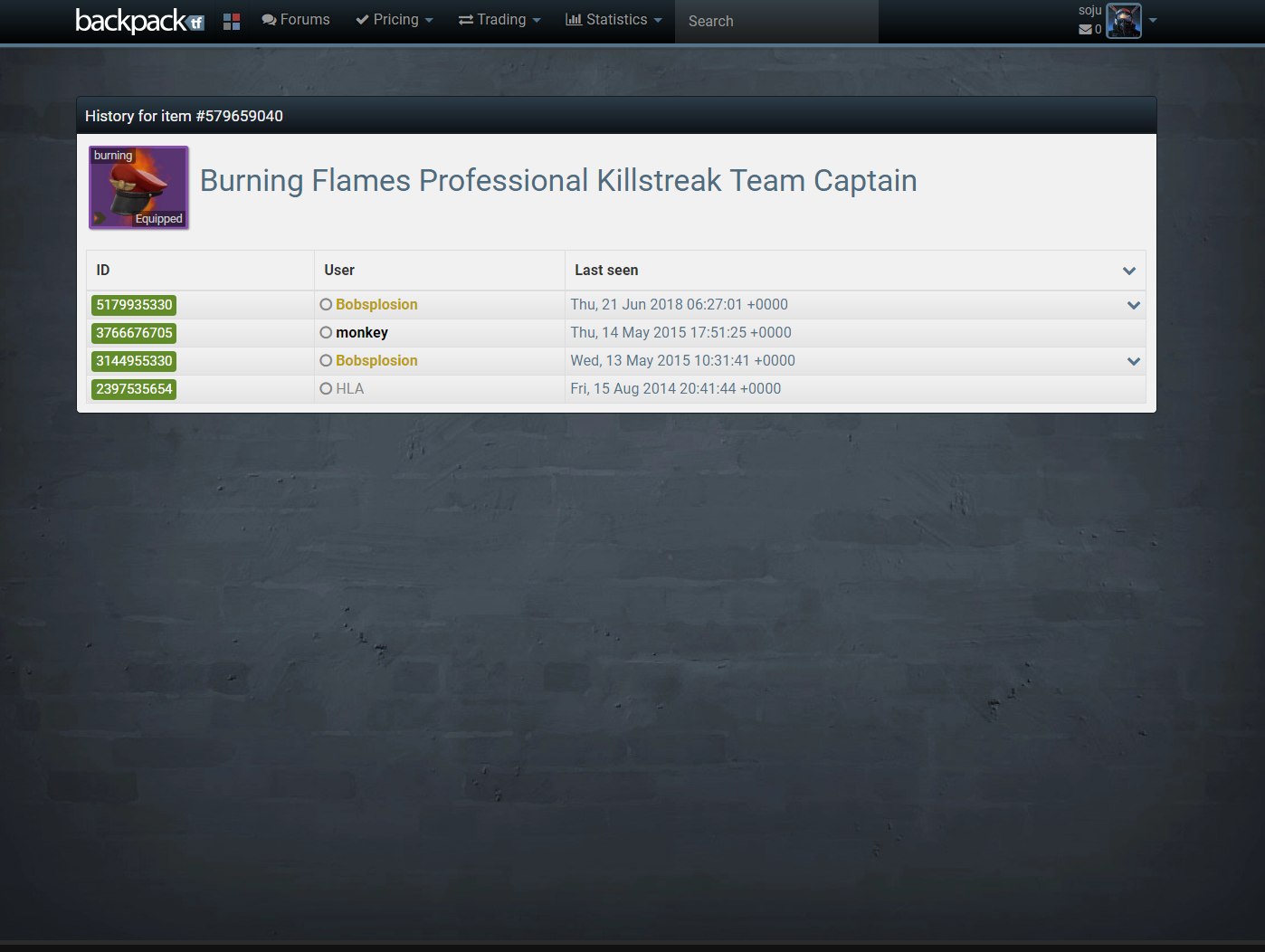 On this clean (not duped or gifted) unusual hat, all the item ID’s are in proper chronological order, so there are no ugly red rectangles. Comparatively prepossessing, is it not?

What are duped hats and how are they made?
"Duped" is short for "duplicated." A duplicated item is an item that was literally copied by either

1. Steam Support because the player possessing it accidentally deleted it, lost it due to a glitch, or lost it via a scam.
2. Nefarious individuals who exploit bugs/glitches in the game to somehow create two identical items.

Will Valve punish me for owning dupes?
If you’re not the one who created the dupe, Valve won’t care. If you did create one, Valve will ban you for breaking Steam Terms of Service, and there is a chance of the dupe being deleted.

Why are dupes so disliked in the trading community?
Since a hat is duplicated that means it wasn’t unboxed by some lucky player with a 1% chance of obtaining one, it was either made by Valve with the click of a button or some lowlife exploiter trying to make a profit. Duped hats are seen as dirty, impure, and tainted compared to ones obtained the way they were meant to, therefore making them harder to sell. Whether you plan on keeping an unusual hat to wear forever or are looking for a buyer who will, the choice between a clean and dirty unusual is obvious, especially if the prices are similair.

Is it REALLY that big a deal if the hat is duped?
No. The only difference between a clean and an unclean unusual is the warning you are given when you view the hats history on a third party trading site that many traders don’t even know how to access. In my opinion, dupes don’t matter unless it’s a mid or high tier one like the Team Captain in the above pic, something that you would show off with pride. As for everything else, not so much. As someone with PLENTY of trading experience, I notice that people often will point out that an unusual is duped in order to get the seller to lower their price.

What’s the source on that awesome SFM Branding Image?
The talented JUMPixel
Original & Unedited Pic Can Be Found Here [i1.minus.com]